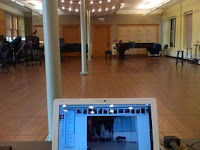 Today was our second and final day of auditions in Chicago. I could see where the "Windy City" nickname came from, as the wind whistled off the lake and between the buildings downtown. Started off the day with a walk through Millennium Park, filming a short video for a colleague and making fun of the sounds coming from the Antarctic exhibition at the Pritzker Pavillion. ("Hello, my name is Rahree, and today I'd like to start with a song inspired by the sounds of whales giving birth, as transcribed by Hohvannes. WAAAAUUUUUNNNnnnnnnkkkkkkkk...." Juvenile, yes, but also fun in that stupid 13-year-old way.)

We heard singers for the second day at Roosevelt University in Chicago. Saw some familiar faces (including TallBlondMezzo, a gorgeous compadre from grad school) and heard some really fine singing.

And now? We're sitting in the waiting area of another airport. Funny how they all start to run together... The curbside checkout man was terribly nice to me, as of course my suitcase weighs about 7 pounds more than it should. I hope that something really great happens to him, and for that matter all of the lovely men who have let my behemoth of a suitcase slide through the checkpoint without making me pay the fee, tossed it into cars and cabs and hauled it upstairs. I love you all. My back and terribly wimpy biceps thank you!

Heading to New York this evening. I enjoy New York, as it's fairly familiar to me, I love the neighborhood in which we stay, and there are so many buddies that I am excited to catch up with. And to get in the mood, here's my playlist:

Tomorrow? A day of Studio auditions at a new studio on 42nd Street. JW is back to join us for these, and it's always fun when he's around. I'm looking forward to it!
Labels: getaways work