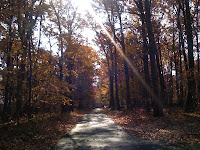 I've been up for four hours already. And while I should wait until I have a brain cell left to post, I'm even too dumb for that... here are some random thoughts:

I've had a few days away from work, and am starting to process the whole audition tour a little more. I have to say that I'm going through some serious withdrawal...after luxuriously having my colleagues available to me almost 24/7 for several weeks I'm now wishing I had an excuse to call or write... it really speaks to how much I like and respect my colleagues. (And has nothing at all to do with me being totally lame. Right?)

And while there's a literal ton of work to be done before next summer - casting being the most pressing issue - I'm totally excited for the season to start. (The summer always looks like fun in the wintertime, I know.) I have a few personal windmills to tilt at before the season begins, though. If I'm successful, they should make this summer a little easier for our artists. The cold calling begins on Monday. Wish me luck! (Or sing me your version of "The Impossible Dream!" Or the Mission: Impossible theme... )

But there's little work-work to be done today. On the docket? Laundry, in a biiiiig way. A nap (which never happens - anyone have advice on how to train yourself to catnap?). Lunch with a girlfriend in Bethesda. Some visiting for Boo. Maybe Christmas cards? (I think I already have a gajillion, but I have no idea where I put them...) And hopefully a later bedtime than last night: I swear I was asleep on the couch by 8:30pm or something equally obscene.

djhenze said…
OMG - Boo is such a cute little puppy! With a name like Boo he has big shoes to fill. I hope you had awonderful Thanksgiving. My house is still a wonderful mess of kids, kids, pets and leftovers. Hopefully we can catch up this weekend.
11:03 AM

Bickerstaff said…
Not sure if this is your first dog or not, but I recently got my first puppy. Something that will make your life infinitely easier is if you start crate training. It seems kind of cruel, but the dogs end up really liking their crate and they become house trained VERY quickly.

Btw, I came across your blog from googling wolf trap and have actually been reading for a while... so hello!
12:29 AM

rahree said…
djhenze - thanks! It sounds like you had a faboo Thanksgiving; i'll give you a call today or tomorrow.

Sarah - thanks for the link! We do have a crate, and it's helping. Fingers crossed for a quick training period - it's cooooold out! Thanks for reading!
8:38 AM