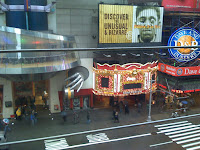 One of the difficulties of posting daily while traveling is the fickle nature of the internet. Couple that with my reluctance to buy a wireless card or take on a yearlong additional phone plan, and you have the crapshoot that is my posting this evening. The gentleman at Roomlinx was very nice, but seems that they'll need to reset the server - could be done within the hour, could be tomorrow morning. So here I am, with all kinds of things to talk about and no forum! It's like laryngitis for my fingers. Not sure when this will hit the blog, so please be patient - if I miss a day I'll try to blog twice [and interestingly! there's the challenge!] the next day. God help me. 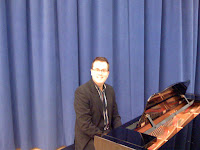 The morning started out sloppy and sweaty. It was raining. There were several errands to run en route to the audition space. I decided that a biiig soy chai latte without the little cardboard cupguard was a good idea. Lots of rain, lots of walking in a heavy wool coat, lots of latte on my lapels....it could've been a totally craptastic day. But today's auditions? Very interesting and fun. Fingers B. was our pianist today, and he's both a delight to listen to and a super fun guy. We heard some really first rate singing today, as well as seeing a few familiar faces from years [and cities!] past. Today Anne Truelove's aria is taking up gobs of precious real estate in my head. Just ask those aforementioned saintly colleagues who have to walk around town with me...they'll tell you. 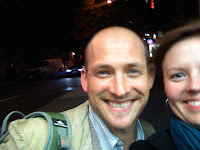 After auditions I met up with J, a friend from high school (All-Eastern Choral Festival. In the early nineties. Never you mind how early in the nineties it was.) and undergrad. It has been so lovely to spend time with him, catch up a little and rekindle our connection...really great. We had dinner at a fabulous Ligurian place in Hell's Kitchen called Nizza (you can read a review here. I can say firsthand that the ravioli and salad pictured are fabulous.), and headed uptown. I'm loving that he's so close [rehearsing one floor above our heads in the studio building! They're dancing and singing and jumping around and moving set pieces, and every once in a while it sounds like they're coming through the ceiling. One singer today was in the middle of Papgeno's first aria when a huge BOOM came from upstairs. It seriously had to be the largest bird ever.]

In true turista tradition, EM and I headed downtown to the Empire State Building for cityscape gazing and photo opportunities. After seeing Seattle from the Space Needle a few days ago, it felt pretty damn cool to have been in two of the highest spots on either side of the nation in the space of a week. Pictures to come!

Now? Tending to the pesky blisters that come with 10 extra pounds and stupid footwear choices. And going to bed so's I can listen to more opera tomorrow.

This really is the coolest job ever.

It's early, but here's my five. It's funny, in opera lingo, your Five are the Five arias that you choose for auditions and competitions - you can sing them backwards and forwards, with polish and character and impeccable vocalism. It's fun to think about carrying 5 good things around in my head with the same intensity which I used to carry my five arias. It's a change I'm digging.

Edited at 1:11am to add one of EM's fabulous Empire State photos.
Labels: thoughtful walking work