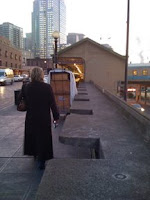 We're definitely rolling right along. Today was a travel day, so we took advantage of a late-morning flight and the beautiful weather in Seattle to do a little walking. Pike's Market has little shops, coffee joints [including the original Starbucks], florists, those fish-tossing guys that are always on the Travel Channel at 2 a.m., 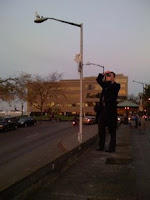 performance spaces, and bakeries, all lined up along the waterfront. It was a beautiful way to start the morning, especially after all of the travel and jet lag starts to catch up.


After a stroll, and possibly the best pumpkin spice chai tea soy latte [high maintenance? true. perfection in a cup? also true.] in the history of time itself, we loaded up our suitcases and headed to the airport. The flight to O'Hare was uneventful: sacrifices were made to the sudoku gods and the checked baggage gods, I listened to a fab new song written by a colleague's daughter {Watch out, Kelly Clarkson!} and lots of my favorite folkies. ACB does FriPod lists, and she inspired me to put together a playlist of songs that would get me in the traveling mood and psyched for our destination. Today's selections? 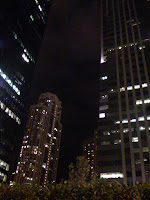 We got into the hotel around the evening rush and went to dinner with the glamorous new-girl-in-town KH and two adorable musical newlyweds [not new to music, but newly wed to each other.] who are good friends of EM. Capped the night off with some honest-to-goodness Chicago-style stuffed pizza. I am now officially in a lovely carb coma. I have never seen a slice of pizza that big. In. My. Life. It was awesome.

Tomorrow is a very long day of auditions, followed hopefully by some low-key sightseeing. I have to say again how lucky I am to be traveling with such great folks. I'm grateful for the opportunity to hear so much singing and to continue to develop and refine my ear. And I am grateful for the laughter, the great conversation, the general ease of the trip thus far - it's good stuff. 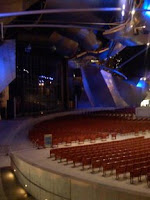 Here's a fuzzy picture of the Millennium Park amphitheater designed by Frank Gehry. It's so sexy! It's a beautiful complement to the urban architecture, and while it doesn't have the rustic beauty of our amphitheater it's an incredible work of art.
Labels: walking work