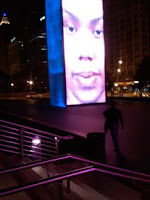 Finished the first day of Chicago auditions. Lots of amazing potential, but we were feeling pretty picky today. I've never been to Chicago before, and my colleague EM is a biiiig fan of the town. I'm starting to come around to his point of view! The part of downtown in which we're staying is close to Millennium Park, and the Art Institute of Chicago.
It's a very cool place, with beautiful parkscapes, bridges and incredible art installations...the video installation in the picture evidently spouts water in the summer, and kids play in the fountain that pours from its lips. It's snazzier than my garden sprinkler was by far... those darn city kids! They have all the luck!

Went to a comedy club this evening for the first time. Zanies in old town Chicago has been around since 1978, and tonight they hosted Rob Little. (No relation to Rich Little, for you old-timers out there.) He made me laugh until I cried. Wept. Wiped the mascara from my cheeks. And Rob, as for the husky jeans from Sears? Dude, I'm so totally there with you and HH.

Then to dinner at an Italian restaurant with KPW and EM, Chicago friends and a high school buddy of EM's who works at Second City. But my favorite moment of the evening was back in the hotel lobby. Being a Saturday, there was naturally a wedding going on in a private room off of the lobby. There were also a gajillion wiry boxers from as many countries staying in the hotel. On one side of the terrace? A gaggle of cute girls singing the Beer Bottle Polka and dancing the Macarena. One the other side of the terrace? A group of slavic boxers singing folk tunes and dancing in a kind of call-and-response. Terribly cute, and yet another testament to the power of music to unite cultures. (And yes, that might be a euphemism for something...)

Tomorrow will be a hard day: a full day of auditions followed by a late-night plane ride and me sleeping on a couch until a room opens up. I'd be lying if I said I was excited about it - the entire picture is overwhelming. But I have no doubts that there will be moments of energy, inspiration, and support throughout. 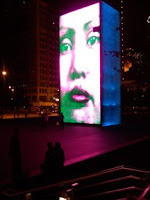 I have friends who take on thirty-day projects, whether it's blogging or photography or meditation, they assign themselves something to do for thirty days that will make them better - whether by exercising a creative impulse, curbing a detrimental push, or being more observant to the world around them. I'm getting inspired. Usually over Lent (ah yes, a Catholic girl...) I try to observe the period in 3 ways, in prayer, in denying myself something that I think I need, and in learning/giving/doing something positive. I'm thinking that I might fast-forward this to the month of November rather than waiting until the spring. Maybe it's being removed from my usual digs, maybe it's the intensity of the singers we're hearing, maybe it's just that I really need a good night's sleep, but I'm pretty thoughtful lately. It seems like a good time to get some perspective.

Looking forward to hearing a little more from the great city of Chicago!
Labels: thoughtful work