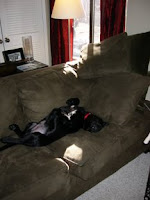 The universe has a funny sense of humor. Sometimes funny ha-ha, sometimes just pointed and timely. Evidently, I provoked the universe by writing yesterday that nothing much was going on...

3am rolls around, and something rouses me from a deep, dream-filled sleep. It's a smell. A not-good smell. I head downstairs to see if the pup is ok. He's not - has had a particularly nasty accident in his crate. No big deal...I actually feel badly for the poor little guy, and thankful that I am both toilet trained and have full run of the house. I throw everything into the washer, clorox everything in sight, and climb onto the couch with the hound, hoping to go catch a few more zzzzz...

at which point said puppy boots all over the couch and me. eeeeewwwwww to the Nth power.

and then the cat gets sick. it's the only instance of animal sympathy booting i have ever seen.

4am i'm outside, in the darkness, hosing off the couch cushions and leaving them white-trash-style in the front yard. The paper delivery guy waves, and I try to wave back but, well, the hour is too early and situation far too gross to be nice to anyone.

by 5am hubby is awake, and we have dragged the pup into the bathroom for his first bath. He's so sick and sad by this point that he lets me turn the shower on and just lays there as I soap him up.

at 6am i'm resigned to staying awake. i make a cup of coffee and pop a batch of cinnamon rolls into the over because, well, my house still is smelling a little left of center despite the plethora of cleaning products I've used and the mild chemical burns on my hands. [Don't mix cleaning products before you've had your coffee, kids. It gets ugly.]

waiting for the pastries to come out of the oven, i sit on the kitchen floor, because it's so clean i could perform surgery on it. pup, who is now just about too big to do so, climbs into my lap, still damp from his bath, and falls asleep. kitty comes over to check him out, and curls up next to me.

even though the whole morning is totally, disgustingly shot to hell, i'm happy to have two sleeping animals curled up with me on the kitchen floor.

although next time? universe? i can totally skip the disgusting parts and go right to the cuddling. really.

edited: It's now Monday morning, and after a full weekend of the activities described above, we are en route to the Vet's office. I hope they give me plugs for both ends, because otherwise the little guy is not going to see another weekend... Universe, you win, OK? Can you just be nice for a while? Please?
Labels: hard place kitty puppy