Pete at the pearly gates 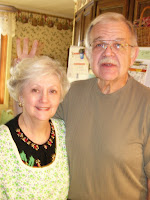 "You know why he's smiling? Because in heaven? They have two-ply."

My brother and I tried, fairly unsuccessfully, to bottle the giggles rising like the most inappropriate bottle of champagne. The backstory was well-known to both of us: after a lifetime of living in old homes with older septic systems, the only toilet paper permitted to cross the Pokego threshold was standard, one-ply, use half-a-roll at a sitting Scott tissue. The local plumbers were not just on speed dial, but also had nicknames; the Bobbsey Boys were called to the latest house several times yearly. In my adult life I was known to splurge on the made-of-spun-silk, quadruple-ply, soft-as-an-angel's-tushie toilet paper on a fairly regular basis, as an obvious backlash to the years of scratchy Scott t.p.

But this gigglefit didn't take place at the Pokego house, or my house or Mike's house. We were at a viewing. My first viewing, actually. My father's viewing, to be specific. And, as Mike and I looked at his face, spackled liberally in stage makeup, we couldn't figure out why he was smiling. It was just a little smile... as if he was amused with the whole thing.

I like to think that, while he didn't want to leave us, that he was happy. Happy with the things he had accomplished in his life, in love with his wife, proud of his kids. And that maybe, as his life flashed before his eyes, he really knew how loved he was, in return. And, to be honest, he probably was pretty amused at how the funeral director tarted him up for the viewing...he knew that mom would whip a better lipstick color out of her purse, and apply it unapologetically in full view. (You looked pretty good in the shimmery pink, Dad!)

I also like to think that, as our Pete met the other St. Pete at the pearly gates, he was bid welcome and handed a big roll of Charmin.