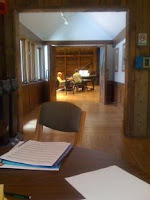 So this is the fun, crazy, magic time at work. The energy level is high, the multi-tasking is constant, and there's more than a little bit of ADD to go around. But you can't really blame us for being scattered, what with all the nifty stuff going on!

This was taken during a rehearsal for our first show in the FC, a production of The Lord of the Rings: The Fellowship of the Ring. We showed the full hi-def movie on a screen that was seriously larger than my home, with a live orchestra, two choruses, and soloists. Now, I will admit that I've read all the books, even the Simarillion, and one of my middle-school gifted project may have been to create a scale model of Frodo's hobbit hole. So I'm a little partial, sure. But it was AWESOME. The emotion on-screen was echoed, enhanced by the beautiful score and the great playing. We held rehearsals in The Barns, (as the other rehearsal spaces were full of opera singers and staff,) removed all the cushy patron chairs and oriented the room to the side, in order to fit the full orchestra on the floor and the choruses on the stage. The orchestration called for several less-conventional instruments, including a kind of prepared piano...although unprepared might be more accurate. It was an upright instrument with the frontspiece removed so the strings were visible. And the score called for the strings to be struck with - wait for it - a metal chain. Now, I've played piano since I was a wee babe, and my first job was actually selling Steinways and Yamahas...I have tremendous respect for the instrument. But I had to take a crack at it... I swung the chains back and whaled on the strings. YEAAAH! And then immediately felt terribly guilty and dampened the strings.

More about the first opera of the season - coming soon!
Labels: work