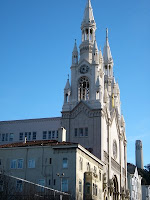 We checked into our hotel in San Francisco at 11:30pm last night. Which felt more like 2:30am. Or, rather 3:30am, if you take into account both the change in time zone from our home base and the change back to standard time. I'm feeling it today, my friends...and while I know that the transition to Cincinnati will be the hardest of the tour, I'm still feeling a little wiped out. But we're meeting some old and new friends for dinner this evening, and I'm sure a little bit of unwinding and catching up will do us good.

We heard folks in San Francisco Opera's chorus room today. It always takes a little while for my ears to adjust to a space, but the adjustment is primarily in relation to the size of a singer's voice. We started the day with a singer who has a sizeable instrument, so it was easier to assess the others. And we heard "What a movie" from Trouble in Tahiti twice today...it's such a fun piece, and I can't help but dance in my chair a little when someone sings it! (if you know the piece, you know exactly when I start to sway...) Today's high point was a dramatic one...there were several auditions in which the performance was just, well, compelling...both vocally and dramatically. Those ten minutes of total commitment really energized me - it's exciting to see a performance, rather than an audition. (And yes, I really think they're vastly different.)

In other news, we met with a director who's working at SFO and several WT alums stopped by to say hi, as did LO'N, a great coach and buddy of mine from grad school. And I dropped briefly by a Boheme rehearsal and caught a glimpse of Angela Gheorghiu...tiny and all done up. So I've had my "star sighting" for the trip, I s'pose!

Dinner shortly, and then early to bed for yours truly, in order to preserve (maintain? create? maybe, at this point, that last one's the most accurate) some kind of schedule that will translate back to the east coast. Otherwise you folks in Cincinnati are going to have to sing REALLY loudly to wake up the sleepy panel...