Skip to main content
Labels
November 13, 2008
OK, by now you've read the post of the hell that was yesterday on Kim's blog. This morning I woke in Chicago to...wait for it...no coffee in the room. I'm either cursed or the universe is telling me to cut the caffeine. Or both. 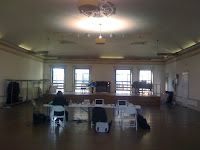 This is the room we're in in Chicago. It looks pretty standard, maybe with the exception of the sunlight streaming in through the windows. But here's the view out the other window, the windows behind the panel, the window towards which the singers are pointed... 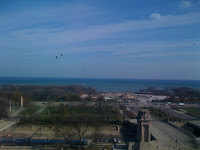 Not too shabby, eh? The view of the lake is truly magnificent, the room is amazingly live...it's a fabulous place to sing an audition...

...unless you're on the panel.

The acoustic is live. Super live. Bathroom shower live. Which means that tiny voices sound huge, and big voices make our ears bleed a little. It's hard to tell how fast and or wide the vibrato is, whether or not the tone is aspirate, and sometimes even where the center of the pitch is. The language is often obscured by all the feedback from the hard surfaces. So our job is to try to discern how these applicants stack up against the folks we've already heard in four other cities... it's not the easiest job I've ever had. We have a secret weapon, though! Our monitor is none other than Rodell Rosel, who has spent two summers with us in Vienna, Virginia. We know what he sounds like in The Barns, so we asked him to hop up on stage and give us a few bars of "M'appari, tutt'amor." And just like that, we have a frame of reference.

No more opera today...tickets to see Second City with friends from town. Time to stretch and repack for tomorrow's trip to DC. I can't wait to see my boys and sleep in my own bed, even if just for two nights!