We took the train from New York to Philly on Saturday morning.

We left the hotel and drove around the block - just to make sure we liked the cabbie - before pulling back in to retrieve a forgotten train ticket. The Red Top, ensconced in his heated cubby at Penn Station, was gracious as he schlepped our tons of baggage into the station, and from there to the train.

We arrived at the Black Box at Curtis where there was no sign* of our reservation.

(*insert feelings of dread, and intermittent flashbacks to Cincinnati)

After convincing the (very kind) security guard that we were legit, as were the 35 people who were coming to sing/meet/interview for us, we hauled our sorry, travelworn bodies to the third floor, to the lovely black box theater. We were ready to relax, hear some of Philly's finest, and get some work done. We walked into the room... 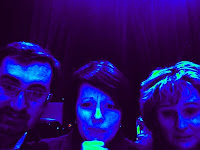 Our heroic monitor, DA, spent the majority of the morning plugging in space heaters, finding extension cords, making numerous calls to officials regarding the heat and lights in the space. My notes became much more concise, as I couldn't type with large blocks of ice at the ends of my arms.

By afternoon everything was worked out, thankfully.