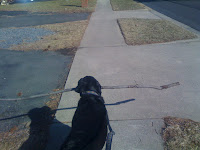 I walk the dog every morning. No news, that. It usually helps me wake up, and puts me in a good frame of mind.

The last few mornings it's been cold. Not Wisconsin or Chicago cold, or even Pittsburgh cold, but cold enough for me to dread the morning walk. I've been rushing the little man through his paces, and our route has been steadily shrinking. There are more cars driving too quickly on our neighborhood roads, and we've gone to great lengths to avoid other dogs, rather than dealing with the freakshow that is Boo greeting a new friend.

But this morning it's a little warmer. And we set out a little before 7am, the sky grey but light enough to be seen in my cat burglar regalia.

As the pup stopped to sniff, a school bus drove by. And a little girl in glasses made eye contact with me. And smiled.

We continued on. My internal walkman turned to this song, and we bopped down the street. A burly man in a striped hat and scarf was riding a bike down a busy street, opposite traffic. As the cars drove past he headed toward us. (I swear he had a vodka bottle in his water holder, but it could've been an energy drink in a glass bottle. I guess.) He stopped and told me about his childhood dog, a big lab named Bear. He loved Boo up a little bit, and Boo was so happy that he crashed full force into the guy and wiggled around, a big smile on his doggie face. The guy absorbed the puppy love without losing his balance one bit, and wished us a good day.

And I'm struck by the unconscious smile on my face after two short encounters with strangers.