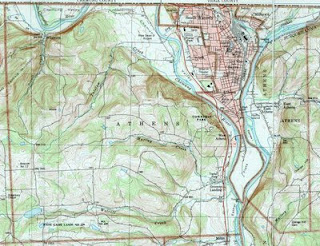 This is the small town that I grew up in. I lived in several houses, in several neighborhoods in and around this town as a small girl.

I went on my first scavenger hunt. I found a beautiful blue bottle that the Flood of 1972 had buried in my backyard. I learned about the local Indian tribes and saw their fantastic plumed headdresses at the library, and read every Bobbsey Twins/ Alfred Hitchcock/ Stephen King book on their shelves. I learned about the Underground Railroad, and that some houses had secret rooms created to hide people. I found a shale arrowhead in my driveway. I learned the names of wildflowers...Crownvetch, Devil's Paintbrush, wild clover

I learned to play piano. I saw my first horror movie (Nightmare on Elm Street 1 and 2...a double feature), ate my weight in penny candy from Covey's, tried to be cool even though both of my folks were teachers and everybody knew them. Knew me. I had my first kiss. I learned to equate the smell of fresh manure with soft-serve ice-cream. (don't ask.) I walked through the cemetaries and talked to the gravestones, not able to bear how lonely all of those hundreds of people must have been, underground, silent. With no one to talk to.

The water was always present...rivers to both the east and west. Sliding too close to thin ice on sleds in the winter, sneaking down to dunk our feet in the summers...always the smell of fresh water. It brought us presents - shiny pieces of antique glass, an old key fob - but it also would cut tender, shoeless feet, flood-buried glass marking where there had once been water, where the water had beaten the land.