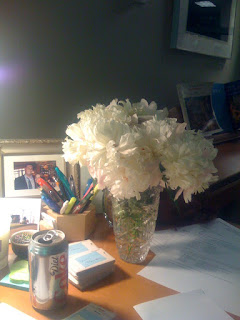 Ok, the second day in the office after a week away is always better than the first...especially if there are new boots involved! (Which there were! It's only barely cold enough to wear them, but yours truly does nothing so well as rushing the seasons...tights? Check. Chai tea? Check. Boots? Heck yeah check!)

Even though this is technically a "slow" time of year for us, we're gearing up for any number of things that are pretty darn important. We're trying to put together an interesting chamber music series for 2010-2011 that's compelling but won't put us in the poorhouse. We're brushing up on repertoire so that it's in our front brain as we travel and audition for next summer. We're getting ready for the first application deadline (which is THIS FRIDAY, for all you singery-types who read this) and the subsequent screening process. We're looking at any and all scheduling possibilities for summer 2010. We're wondering how to pack efficiently for both Houston and Chicago. We are looking down the barrel of several weeks on the road, and wondering if our clothes will fit after we eat our way across the nation.

(It's not looking terribly promising.)

To that end, the Boss Lady and I are going to try this little plan out in October...I invite you to join us! It looks to be fun, not terribly punishing, and designed to sweep out some old habits. So I'll be writing about it here, as well as tracking my progress on the website. Wish me luck - better yet, come along for the ride!

And speaking of important, if you haven't caught KPW's audition series on her blog, do yourself a favor and check it out. Today's topic is headshots, and we spent some time today scrolling through the shots that had been submitted thus far. There were some gorgeous shots; some blurry, decidedly amateurish photos; and several pictures in which the photographee looked like they wanted to kill/seduce/ignore/reprimand the viewer. (And there was more than one shot where the singer looked like they wanted to BURN HOLES THROUGH ME WITH THEIR EYES. Ow.) It's your public persona, folks: it should make you look both good and infinitely trustworthy/capable/employable.

In other news, here are several things that I've been digging lately:
I'm also digging loads of fresh produce and duck confit grown locally thanks to these guys. It's finally apple season, and I've been eating them constantly...alone, with peanut butter, and turkey sandwiches, in oatmeal. But my recent favorite is slicing them into a little butter, sugar and cinnamon on the stovetop and sauteeing them until they're soft, and then eating them over vanilla ice cream. So tasty!

Am I rambling? I think I'm rambling...