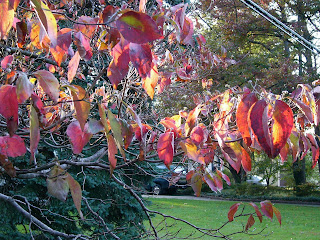 It's a holiday! For some of us lucky suckas, that is. If you have to work (Hi, hubby! Sorry!), well, I hope you can finagle a ridiculously long lunch hour or an early quitting time. I personally think that not working on Mondays is something that all companies should consider...the 4-day, 40-hour work week sounds pretty good to me.

I'll be spending the day watching bad tv (Stacy and Clinton, I heart you!), doing (endless) laundry, making an apple crisp, and wondering why there's a beemer parked in my yard. (No, it's not ours...some dude's been sitting in it for the last hour. If I don't post tomorrow, call the police! Freaky.) One other goal? A little bit of time at the piano...I enjoyed last weekend's concert so much that I'm making a point of playing more often.

On the Eat.Sweat.Blog front, I ran this morning and it blew chunks. I was actually looking forward to it - skipped the gym in favor of cool weather, checking out the leaves in the old 'hood, and some new tracks on the iPod. But it was a real struggle. In the old days P.J. (Pre-Jogging), when I saw someone running I would imagine monsters chasing them...some monsters were vicious and toothed and fanged, and the runner was really working to get away from them. Some of the monsters were a little out-of-shape themselves, but were galoomphing behind their chubby runners, occasionally swiping at them with a big clawed mitt. My monster this morning was little and nipped at my heels in an annoying fashion for a mile and change. After that mile-and-change? I kicked its little tush and walked home, heaving. I know it's probably a combination of fatigue from 5 decent workout days in a row and some not-so-great sleep, so I'll try to do some yoga and get to bed a little earlier this evening.

Wow. This might be the rambling-est, lamest blog entry ever. However, if you read this often, you've built up a tolerance by now. And if not? Run awaaaaaaay!!!