It's a snowpocalypse! We're up at the ass-crack of dawn (of course...that's how we roll), and there's already about 8 inches on the ground. And it's supposed to continue throughout the next 24 hours.

This little Pennsylvania girl is psyched.

I have to admit, I'm a little disappointed as we had RSVP'd to 3 different holiday parties over this weekend, and I was really looking forward to catching up with folks.

But, on the other hand, SNOW! COPIOUS AMOUNTS OF SNOW!

I'll update throughout the day with photos and maybe even some video of Boo in his glory. (It's not light out yet...that's how early we're up! But once it lightens up I'll be snapping away.) It's pretty awesome. And yes, I did get my bread and milk and toilet paper yesterday, so we're alllll set. Bring it on!


9:18am The neighbors brought over a rawhide toy that's gotta be 3 feet long, as well as two bottles of raspberrytinis...I think we all know what we'll be doing this evening!

4:22pmWow, this morning and afternoon just floated by! Boo and I have been outside several times, and there's enough snow (and sparse enough traffic) that we've been able to forego the leash in the neighborhood. We stopped by to see his girlfriends (the two labs on the corner) and ran with them, lost several tennis balls in the snow, and totally molested several neighbors who just happened to be outside while we were walking. (Good thing they're good sports!) 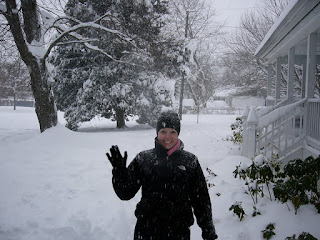 I made blueberry muffins this morning, and let a pot of soup simmer for an hour or so this afternoon. Got some laundry done, and even shoveled out my car! (Well, kinda...I got most of the snow off the top of the car. Can't open the doors because there's too much snow blocking them, but hey! I'm not going anywhere that my feet can't carry me for a day or two.) Now I'm stuck between making an apple spice cake or figuring out what to make for supper... it's a happy conundrum, I won't lie.

The dog is pooped! (I would be too, if the snow was up to my chest and I ran around in it naked!)The snow is over my knees in most parts of the yard, and all my lined pants are damp, as are all of my hats and every single glove in the house.

I call that a successful winter day!