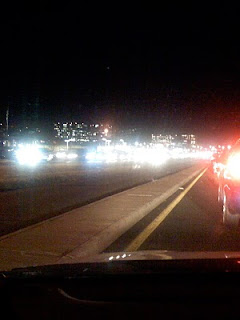 I don't remember if it's a family tradition or just something I picked up after moving out of the house, but I do believe that my actions on New Years Day serve as a kind of template for the coming year. Waking up totally hungover after a night of revelry isn't so much on my radar anymore...been there, done that. My 2010 is going to be different.

I've spent this week preparing...the house is organized and clean - well, as clean as it gets around here. The menu for 1.1.2010 is something new - it might be a flop, but it's a step out of our usual repertoire. I have a workout planned, as well as quality time with hubs and the animals. And there's some time with my buds on the schedule for the weekend. But lest you think I've planned myself into a corner, I have oodles of time for daydreaming, for making big plans, for deciding which windmills are worth tilting at this year.

While it's not a resolution by any means, I have decided to do less navel-gazing and more giving in 2010. Favors, good vibes, blood, my last $20...all are fair game, so be brave enough to ask. (For my part,  I'll try to be aware enough that you don't have to.) To kick it off, you can find my first mix tape of 2010 here . Lots of the tunes are new to me, as are many of the groups. It's equal parts positive, ruminatory and a wee bit melancholy...just like I like it.

I saw this on someone's FB page, and am co-opting it for my own gain.

Never regret anything that made you smile.

As far as my five, well, you are my five, my friends. I hope that the best parts of your life thus far have been only preparation for the good things that await you in 2010!

airstreamdiva said…
Happy New Year! You are an inspiration, my new friend, and I mean that in the least-schmaltzy-actually-true way possible. Have a great DAY ONE.
10:08 AM