A lovely bit of snow has gifted us with a two hour delay this morning.  i am thankful, although the extra time on my couch may sap my motivation completely...fighting off a sinus infection (i'm sure you all wanted to know the status of my head. you're welcome.) makes me want to curl up and sleep constantly. i should work out, hit the grocery store, buy a pair of boots that don't leak. But instead? Couch & laptop & coffee & navel gazing.

It's all I can muster. 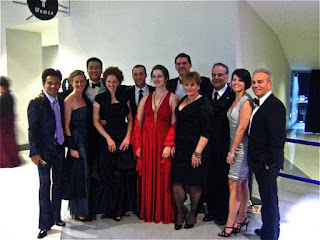 So, Grammys! We got all gussied up and piled into our rockin' white Dodge minivan. (Because that's how WT rolls!) and headed to the afternoon pre-telecast. We got a parking spot close to the venue and stood in line in the warm California sunshine, waiting for the gates to open. Once inside (it was in the West Hall of the Convention Center adjacent to the Staples Center) there were food stations and several open bars...lovely! It was general admission seating, so we nabbed fab seats front and center in the room, and settled in. There weren't a huge amount of folks there, but there was still some pretty amazing starpower...we saw Taylor Swift and Colbie Calliat win their first Grammys, saw Neil Young and Loudon Wainwright and Imogen Heap and Maxwell (he was sitting right behind me!), and a slew of people that I didn't recognize. There were great performances, too: my favs were Lalah Hathaway and Kurt Elling singing "God Bless the Child", Charlie Wilson and his gorgeous dancers, and Beast, a Canadian band who was up for best video: Check it out - it was pretty cool!


As the afternoon wore on, we started getting a little squirmy...3 hours with no intermission is a long time to sit, and everyone was starting to get a little peckish. The ceremony ran a little long, and we stayed, like good do-bees, until the very end. Then KPW ditched her rockin' heels and we ran over to the Staples Center, hoping to grab a bite before the next ceremony.

We checked the camera (boo) and headed up to our seats. There were loads of people alllll gussied up (I saw a non-ironic Vegas Showgirl headdress. Amazing.) in all kinds of finery. The stage was organized into two discrete sections separated by a large hallway/runway. As Gaga was performing on stage right, they were setting up stage left for the next performer. And as the commercials ran for the TV audience they broadcasted highlights from past ceremonies on the video wall at the rear of the stage. I commandeered KPW's binoculars and spent a large part of the evening scanning the floor for famous people and good dresses...you could see Lady Gaga's spiky silver dress unaided - pity to whoever sat behind her! It was interesting to see where they seated people...nominated folks were often on the aisle, but in different sections from their competitors.

Good stuff? Gaga. Beyonce. Pink - phenominal! I liked Dave Matthews and Jeff Beck, too. And while I know very little about rap, I am a fan of Eminem - he's pretty freakin' charismatic.

Fails? Mos Def & Placido's intro - could anyone understand what they were saying? Taylor Swift's transposed duet with Stevie Nicks...it wasn't the original key, and she didn't quite make it up to the top. Jamie Foxx's relative (sister? cousin?) dancing onstage. That was weird. And while I loooooove MJ, the tribute was not my thing.

Also, blood sugar fail and tiny chair fail. By the end of the night, with all of the people and stimulus and lights and music, I was totally overwhelmed and uncomfortable and HUN.GRY. A quiet dinner nearby restored my humanity, but it was seriously touch-and-go for a while.

Was in bed late, awake for the flight home early...still reeling from the whole experience, honestly. But it was pretty amazing, and I'm so grateful to have had a chance to go.

mvedwards said…
Good call on the silver dress! You rocked it!
8:40 PM

rahree said…
thanks! (i'm secretly hoping to recycle it for a summer event - maybe the season opener?)
8:42 PM