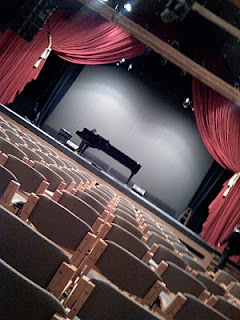 I'm writing down everything that happened yesterday, mostly so that I can refer back to it in two months when the opera season starts and the phrase "Holy CRAP it's busy!" is on a continuous mental loop. It's not great grammatically or a good example of storytelling, but just think of it less as a story and more as my memory, preserved in writing so that it doesn't bump the important stuff (like the combination to my lock, how to make risotto, or the words to several comedy sketches from the late 80s) out of my head.

Dressed in my performance blacks and at work by 9am. 4 hours of desk work, including a huge push to get a grand rights license passed through before the evening's performance: we've been trying to negotiate a streaming broadcast with the publisher, but we got stuck, so we're re-negotiating. I hope. The Big Boss (who is, actually, a very tiny woman. Don't be fooled.) is getting involved, and they'll have some 'splaining to do. Anyhoo: desk work for a few hours. Some light furniture moving. A trip to the gym for a short workout, and a pass by 'bucks for java and Staples for a hard drive for hubs. Write some remarks for an evening speaking opportunity. Grab gak from the boss' office so she doesn't have to stop practicing. Meet the Secret Service detail for the Supreme Court Justice who's attending the show. Print out an extra pair of tickets for the Judge, show the primary Secret Service  dude every means of egress from every room in two buildings. Find a wheelchair. Take travel reimbursement checks over to the singers' dressing rooms. Steal several mini Twix from the green room. Grab personal gak, run it over to the Barns. Check in with the recording engineer and box office manager. Try to meet with the boss, but rehearsal has started and the opportunity is lost. Head over to the other building: greet some old friends of the opera program. Meet the new board president. Only realize that the new board president is the new board president hours after the meeting. Doh! Check in with the Secret Service dudes: all good! Pit stop: bathroom, reapply lipstick, fluff hair. Duck into the reception, mill around awkwardly for 10 minutes, comment on the incredible sharpness of the Librettist's suit - with the gorgeous, slightly iridescent pink lining - then hop up on the fireplace mantel and speak, much too quickly and without the meticulously written notes, about the upcoming commission and the evening's performance. Hop down, cheeks ablaze, feeling stupidstupidstupid about not sounding mature or elegant at all - will I NEVER BE A GROWN UP? Usher some patrons to the pre-show lecture, listen to the first 2-3 minutes, and sneak out to the performance building. Check in with the singers. Make sure that the props and furniture are set. Check in with the Box office Manager. Contemplate buying a glass of wine and a cheese plate from the bar, but decide against it. Check in with the CEO, with friends who've come to see the show, with the engineer, with the two (?!) videographers. The lighting designer/house manager has most of the night under control - he's been at it for years, and knows all there is to know. Thank goodness. Pretty soon, the folks from the lecture next door file over, grab their coffee or wine, and make their way to their seats. Double check props one more time. Check in with the Secret Service guys, and take a seat in the back of the theater.

Laugh my ass off. At horribly inopportune times. Remember why I love this art form, and more importantly these people, these performers, so darn much. The Secret Service guys around me are totally stoic...and I have melted into church giggles at the sight of a certain soprano falling on the ground time and again. Physical comedy? Goooood stuff!

Intermission: Sneak out of the house a smidge early. Head up to the stage to switch furniture and props around. I have a cheat sheet, and I'm following it religiously, as I've not been in enough rehearsal to make it intuitive. (Note to self: next time budget for a stage manager!) Head to the lip of the stage. Write out some questions for the singers for the Q&A. Take the stairs (for the millionth time. In heels. Because I'm dumb like that.) to the basement to give the questions to the Boss Lady and chat up the singers. Head to the house for the actual Q&A, then excuse myself again and listen to the majority of the second half from a headset plugged into the recording engineer's stack. Sounds pretty freakin' awesome. Steal the Boss Lady's camera from her dressing room. Check in with the Secret Service dudes and librettist regarding a post performance photo op. Realize I have no idea how to work Boss Lady's camera. Applause. Head into the theater, corral the Justice and the Librettist, and snap three pictures. Hope against all hope that ONE of them worked. Head downstairs to return the camera. Head upstairs to collect props. Props and fabric go to the costume shop...spike tape gets pulled off the floor, ladders and chairs are moved. Checks are distributed. Ladders are lashed onto car roofs. Singers are herded to the basement to collect their things. CD copies of the performance go into my bag, as do passcards and other pieces of errant paperwork. The last singer grabs her things, I grab mine. We meet the librettist outside the building and walk with him to the parking lot. Everyone is going to dinner...except me. I'm hoping to take off those stinking, high-heeled boots that were SO COMFORTABLE at 9am this morning, pour myself a glass of wine, grab a slice of cheese or chocolate, and relax.

Anonymous said…
Did cute secret service guy find you at the end of the night to say thank you for all you did? I know he was looking for you.

chinger006 said…
I think it's quite alright if you never become a full grown-up...I like to think that the most awesome people in the world never completely grow up. :-)
7:50 PM