It's not that I can't learn. I like learning! It's just, well, not as easy as it was when I was a kid.

No, I'll rephrase. The stakes are higher, somehow, than when I was a kid. Thaaaaaat's it.

Yesterday we had a FAB workshop presentation of The Inspector, John and Mark's new opera that we'll be premiering in April 2011 (mark yer calendars!). It was funny, witty, clever, and turned on a dime...all the things that those two Boy Wonders do so very well. Seriously, I'm in love with it the same way I fell for Volpone all those years ago.

But, I'll be honest. At 2am, as the soundtrack while my head was surfing over some formidable anxiety? I was entertained with how much of it stuck in my head for, oh, thirty minutes worth. And then I just wanted to go back to sleep. But the aforementioned anxiety was having none of it.


This project on the 24th (Which you should totally join me for! You can do it in yer jammies, fer crissakes!) is sucking so much of my focus and energy. Now, don't get me wrong...the computer is awesome, the program is beyond cool, the possibilities are pretty endless.

And there's the rub.

Because there are so many options. So much to learn. So many, many cool things to try, to suss out, and so very little time. I could noodle around with this program for months and probably not figure everything out. But I'm learning so much...about the terminology, the medium, the quirks. It's exciting! And maddening. Because hey! My little project goes live in a week. And, if I had more time to dedicate, more time to play, I bet I could kick some serious ass.

It's true...I feel like I have something fairly large (maybe not in terms of imprints or viewers, but on a personal level) to prove...that I can acquire this skill set, that the large computer purchase was justified, that I can produce something professional and beautiful. There's an artistic appeal to the work - having something to show for what we do in this savagely temporal medium. And I'm confident enough in my abilities to know that it's something that I can do, and do well...But I'm already frustrated with a glitch in the recording and the subsequent audio file...it will sadly be less than perfect, and it rankles.

(See? I CAN be a detail-oriented, faux-OCD person! But, as always, it's in an area in which it's not terribly helpful.)

(Oh, and did I mention that rehearsals for the season start tomorrow? There are a million other things I should be doing.)

But anxiety dreams are SO last season's fashion. So at 7am this morning I brushed my teeth, prayed that none of my coworkers were going to be in the building, and rolled over to the office. 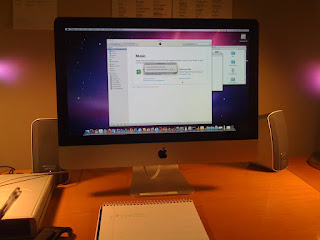 And spent hours with these videos...HOURS. For some reason, rendering video clips into quicktime movies takes a long time...like 5 minutes of saving for every one minute of footage. Probably because I'm trying to shrink a file that's, say, thirty-two GIGAbytes into something in the megabyte range.

It takes a loooong time.

By mid-afternoon, I couldn't stand it. A panicky text to the Boss Lady (who, let it be said, was out of the country when I got this hare-brained idea and shouldn't be dragged into my mess, but graciously was.) was answered by a thoughtful call and some real progress made.

Lessons learned?
Ok, y'all sat with me through that rant. For you? Linky goodness!