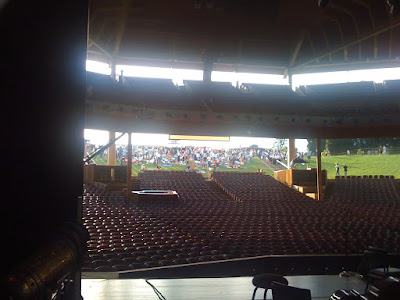 Read: early start, late finish, but three well-placed hours of gyming-shopping-loafing smack dab in the middle. Chairman's dinner in the evening, which featured a FABULOUS meal, conversation with some like-minded folks, and listening to remarks by one of and some musical selections from our Studio singers, and some deft pianistic maneuvering around a disconnected damper pedal by CM. A gorgeous performance with the National Symphony and four of our singers; the Tigress, her infinitely romantic sometimes-husband Romeo, Belle-Maria, and the "most Mexican Tony EVER". (Uh, just kidding on that last count. But DP has some MAD dance moves!) Two post-performance soirees, of which yours truly made it to the first only, because...

8:30am. Arrived at the FC, treats in tow. Driver runs, food runs, orchestra rehearsal, baby-catching, camera snatching...all in a day's work for a performance with the NSO and B'way phenom Idina Menzel. (For the record? She's just as nice as you'd hope she'd be. And that baby has some SERIOUS genes...an angelic little one, to be sure!) Run home for a nap (nap! I can finally nap! it may be the greatest accomplishment of my adult life.), and head back to the FC for the show. Show, guests, and hundreds of fans hoping for an autograph equalled tons of adrenalin coursing through the late evening. Remembering her sweet baby's face and the 12 year old who burst into tears at meeting her? Priceless...you don't see that stuff every day.

Slept in after 9am, for the first time since, most likely, last summer.) Roll into work late for a rehearsal, and stay for all of 10 minutes of said rehearsal. Bad manners, to be sure, but I did add the phrase "opera purse" to my vocab - thanks HG! Payroll, expenses, email, contracts...and then Steve's recital. (For the record, 'twas fan-dam-TAS-tic.) Watched a singer walk (almost literally) off stage, grab jumper cables, beat AAA to the scene and save the car of a DC-area arts presenter. Boy Scouts aren't an urban myth!

Home while it was still light outside! Wheee!

(And trying not to feel guilty about it. )

SIGN ME UP. Seriously, let's do the same thing next weekend. You know how to find me.