(It is Tuesday, isn't it? I'm finding it more difficult to keep track than I should.) 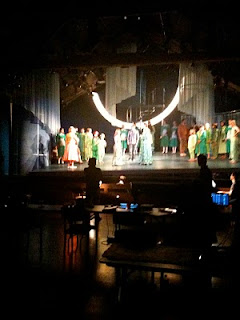 I'm in the middle of my new morning ritual...making a cup of coffee, dragging the animals onto the front porch with me, said cup of coffee, and the laptop. Check email - make sure nothing blew up in the last eight hours. Do a cursory surf of FB and the blogs I follow to make sure no big news goes by.

Zone out. Listen to the cicadas. Watch traffic drive by. Wave to the neighbors of their way to work. Throw a slimy tennis ball into the yard over and over again.

Realize that I better get moving, or I'll be soooo late to work.

Wonder if being late to work is really a bad thing....

It's August. And we're in tech for a supremely lovely rendition of Midsummer. Crazy stage, classic story, awesome costumes, fiberoptics in the set AND wigs. (I've made the Hair and Make-up designers promise me that I'll have them in my wig too.) A cast and artistic team who seem to have genuine fun together, and it totally translates on the stage. While it's a large cast, it's the only project that's happening...which is a far cry from the rest of the summer, when we juggle 3-5 projects at a time. Having a bit of space feels luxurious!

But, lest you think we're eating bon-bons in all of our spare time (HA!), we have a big grant application due this week: personnel reviews: intern evaulations: exit interviews: recording sessions for the radio show next week. And let's not even talk about the fact that I need to edit, send for approval, publicize and stream a guitar concert, book a chamber music series, and resurrect my notes for a class I'm teaching. AND there's the Lord of the Rings concerts. AND that pesky little audition tour.

WOW. Going in late for work actually sounds like a lovely idea.

Instead, I'll keep daydreaming about post-season vacation with the hubster, clearing off my desk, and making some time to spend with these awesome folks before they scatter to the winds.

My five:
And for you? Another new song that I like. It has a mellow, September-y vibe, doesn't it?