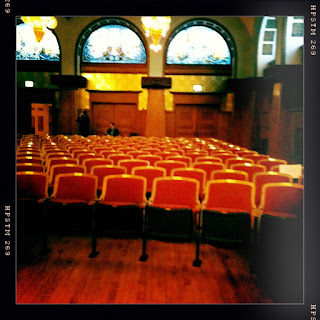 Chicago has blessed us with volumes of good stuff. We're in a bee-you-tee-ful room that is vocally flattering but still easy to hear. And we're hearing some great stuff.

In the vein of my last rant though? A mini-rant. Well, not even a rant...a thought. Here goes:
Dramatic action and physical action? They're not the same thing. Every single aria demands dramatic action...intention behind the line.
These audition pieces often come at a place of heightened emotion in an opera. But it's not enough to wash the aria with that emotional color, without finding the moments of contrast, or the "aha!" moments in the piece. And feeling sorry for yourself? Almost never translates satisfactorily to the hall....sure, it might feel totally appropriate, and could be justifiable to your character (seriously, who HASN'T felt sorry for themselves?) but six minutes of it will not win anyone over, regardless of the beauty of your tone.

Here's an example: Pamina's Ach, ich fühl's. Now, this is a beautiful melancholy piece on the face of it. She's in love, her man won't talk to her, and she's upset.

But she's also trying to accomplish things during this aria...she's trying to force him to speak to her, and also trying to discern why he's not communicating with her. There are tactics that she can use to find out information during the aria...she can weep (which she mentions) to see if her tears will move him. But she can also try any number of other actions...scolding, cajoling, pleading, declaring...within the aria. And she could take a different tactic for each line, to see if something will work, will make him respond...when that tactic doesn't work? She will likely move on to another.

(Next time you go to the grocery store, look for a parent with an 8 year old. Listen to the different ways that child tries to get Mom to buy those whoopie pies...they'll promise things (like cleaning their rooms), ask, bargain, plead, pout, and finally cause a scene to get mom to buy those dang whoopie pies. Not that I'd be recalling a personal incident... Nope...not at all...)

It pays to break your piece down into sections and assign actions to the lines. Start with verbs - choosing real action words will make your tactics clearer to those of us on the other side of the table.

Here's a warning, though. When an aria is fast, or when your character is agitated or fighting to make a decision? Please don't confuse the actions above with pacing/flailing/gesticulating. The action comes from intention. We've seen some amazingly nuanced performances when people have stood stock-still...and we've seen a gajillion performances derailed by unconnected movement.

Here's something to inspire you to get some more action into your life. :) (I'll be singing this all day long!) 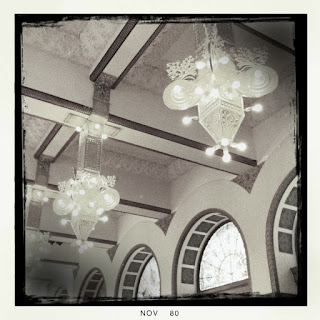