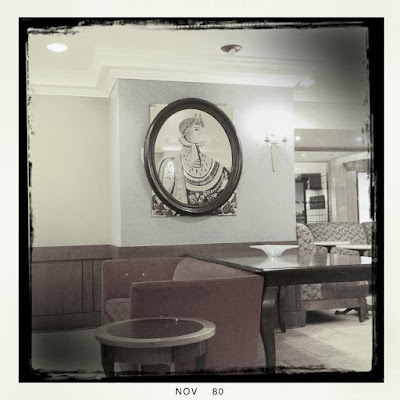 I'm sitting in the Starbucks in the lower lobby of the Palmer House, listening to Leonard Cohen over the sound system (a large step up from Josh Groban's Christmas Album yesterday...that was a rough start to the day.), and trying to keep the anxiety smooshed down. We fly from O'Hare to Dulles today, sprint off the plane and drive to work, where we'll hear another several hours of auditions.

So there's the travel anxiety...we have a buffer, but it's a small one. And, after a full month of travelling and listening to opera, the edges are starting to fray a little bit. We've lost a good bit of resiliency, and things that might usually run off of our backs are now grabbing us by the lapels and shaking us around.

But the thing that is more anxiety-making than that? Is Wednesday.

You see, we hear out last audition on Tuesday evening.

So Wednesday? We will spend Wednesday with graphs and charts, moving people around from project to project, seeing who we can bring onboard and who we have to pass over. We'll try to find the projects that make the most sense given the people we've heard. We'll sit with the budget and look at the numbers to see what we can afford.

And hopefully by day's end? We'll have a season.

This year I have a little more responsibility, and have some of my own casting to do that will lag a little bit until the big pieces fall into place. It's amazingly exciting, but a little nerve-wracking too...I have some pretty big shoes to step into, as I really respect the two guys who came before me. (But I'm psyched to stuff some tissue paper into the toes of those shoes and walk around in them.) It is literally the time when when we put our money where our mouths are, when we use a big pot of cashola to support singers that we believe in by featuring them on our stages and building original productions around them.

Heady stuff, but not without serious implications. And coming at a time when we're feeling pretty seriously compromised by the schedule, the travel, the lack of exercise and the restaurant food...we've been out of the office since late October, and yet all I want is to spend a few days in my house, doing nothing except watching HGTV, playing with my animals and cooking for my hubby.

Oh, and working out. Things are feeling a leeeeetle snug. And when I say things? I mean pants. Blergh.

Wish us a smooth flight east this morning, and just an oooch more stamina for the home stretch.