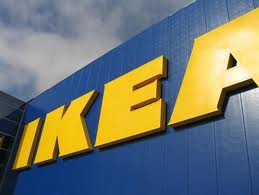 I headed across the world (i.e. the other side of the Beltway) today to visit IKEA. Now, IKEA is one of those tricky stores for me...I LOVE putting furniture together (it's like a 3D puzzle! that I can sit on/put clothes into/ read by the light of when I'm done! WIN!), and I always find 87 things that I didn't think I needed prior to my visit. (Tealights! Baskets! Cool chairs and tables! Laaaaaamps!) But I'm not really a mid-century modern girl...my style is more Mom hand-me-down/Hubby's preference. (He has stronger opinions than I do.) Actually, I'm not really a decorator at all. I'm happy with comfortable, and would rather spend time browsing magazines for recipes or cute outfits or gadgets or shoes.

So when I breezed into IKEA this morning, I was thinking that I'd pick up some curtains for the newly rearranged bedroom, and maybe a lamp. C'est tout.

I "breezed" (read: lugged a cart with more stuff than I had any right to haul) out two hours later, a veritable symphony of toddler meltdowns ringing in my ears. (The melt downs really must've been contagious...I don't think I've seen that many screaming red faces since my last Steelers game.)

I got halfway around the Beltway when I stopped to grab a bite. And looked in more trunk at the carnage. And then? I called my Mom.

"Mom? So, I just bought all this stuff at IKEA. And I don't know if I like it, now that the shiny big-box experience is over...so do I take it home and test it out, knowing that it'll be weeks before I can circumnavigate the globe to return it? Or do I turn myself around right now and take back the stuff I don't love?"

(For the record? Moms rock.)

15 minutes in the terribly efficient, non-judgemental (I could just see them asking "What's the reason for the return?" "Uh...a case of 'I-don't-really-need-it' combined with a huge case of 'Buyer's Remorse?'") Returns department, and I was saved from myself...still enough puzzles to put together, but waaaaay less regret. Whew.

I made it to the gym AND took the dog on a long walk. So, between saving some cash, cleaning the house and exercising? I'm feeling pretty awesome.

To celebrate? I took some of the $$ I didn't spend at IKEAand bought books! I'll be spending the evening toggling between Clash of the Titans on HBO (Don't hate. I'll watch either one of them ANYTIME.) and the new book on Cleopatra. Or maybe the one on Gypsy Rose Lee. And even though I was skeptical when I found one under the tree, I have totally stocked up on these, my new favorite candy bars. (I know! Fruit and chocolate? Only to be eaten when the buttercream and sea salt caramels and nut clusters are long gone...but I have to say that they're AWESOME. And my brother is in serious trouble for introducing me to them.)

My ridiculously early flight to Miami is in three days...day two of which is supposed to be snow-covered. So, do I go to bed early over the next few days in order to make sure that I'm awake and on the road in plenty of time to safely make my flight? Just to be safe, I think I'll hit the hay early tonight...and tomorrow. And Tuesday.

All in a day's work.

Brenda said…
Yeah, but does anyone repeat the words of the song you're singing to on the car radio 3 seconds after the fact and in monotone? Remember how I used to ruin that Lisa Loeb song? Yeah, where is SHE now, huh?
11:09 PM

Brenda said…
Yeah, but does anyone repeat the words of the song you're singing to on the car radio 3 seconds after the fact and in monotone? Remember how I used to ruin that Lisa Loeb song? Yeah, where is SHE now, huh?
11:10 PM

rahree said…
HOW could I forget?! I can still hear you in my ears when I hear that song...soooo funny!
6:52 AM