the winter of my discontent 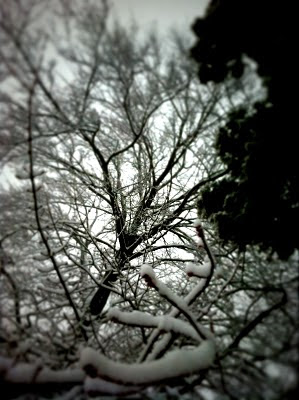 ...not really. It's been a pretty lovely winter, all things considered. But I'm fairly discontent this evening.

It's cold. And I don't mind cold outside...I bundle up nicely for dog walking and such, and am not above wearing 4-5 layers. But my office is an icebox. I layer, and wear wool socks and walk around every 45 minutes to get the blood going...I'm really trying to be both warm and productive! And while hot tea and an illegal heating pad mitigate the effects, I go home with that chilled-bone feeling that doesn't disperse until sometime in the middle of the night...at which point my blood feels like it's boiling.

(Someone please remind me of this little rant when I'm sweating through my clothes in July. You don't even have to be nice about it.)

February. When it's staying light later in the evening (yay!), but somehow not late enough to really get anything done. (Boo.) When the temperatures modulate into the 40s sometimes (yay!), but are still dipping willy-nilly into the teens and twenties. (Boo.) When my interactions with friends and colleagues either result in my telling a never-ending, fairly pointless story (I'm great fun at parties! No, really!), or in my reaching for the easiest answer in my arsenal - which, for the record, is always "no" in February (Boo.) Also in the repertoire? Being reprimanded/contradicted/irritated. (Double Boo.) Feeling like there's not much I can do well or right. (Boo.) Feeling the weight of missed chances, of caution too liberally applied, of the loss of autonomy. (Boo.)

(And by 'Boo.'? I'm not referring to my sweet dog. He's pretty constant in his worship, and for that I am exceedingly grateful.)

Now, I know that my discontent with the month is largely misplaced anger and sadness for my dad splitting the planet the day before Valentine's Day. Or rather, the unfairness of it - I don't think he had all that much say in the matter. And I like to think that, if he thought that we were struggling that he'd have fought to stay. But even knowing that doesn't make it much easier.

(P.S. Dad, if you read this? The ring you bought Mom for Valentine's Day is specTACular! Your taste is still top drawer, even from the Great Beyond.)

So I'm giving myself permission to be cranky and over-sensitive. To eat/drink more than I should, as long as I make it to the gym a few times a week and give to dog a good walk (read: more than a mile) twice a day. I'm going to try to ask for help when I need it.

And I'm likely going to go to bed early as often as possible. Because it's better for everyone if I do.

Even though I'm Bitchy McCrankypants, there are lots of good things happening...RT is back in the office for a quick week, and the office vibe is feeling a little more like summer than frigid anxiety farm that KPW and I have been living in over the last few weeks. Hubs and I are thinking about adding another one of these to our family. The nephew has brought his grades up! And mom sent me an awesome photo series of herself as Lisbeth Salander...at 68. (My mom is so awesome.) And I found a radio station that plays tunes that remind me of a time when I was terrified at the largeness of possibility, and was whole and unhurt (although my barely contained Inner Drama Queen would argued that my life was impossibly hard, I'm sure.)

And, (SEGUE ALERT), here's one of those tunes. (Can you smell the nostalgia from here??) Spend some time reliving your favorite moments, friends...or anticipating them, if they're yet to come.