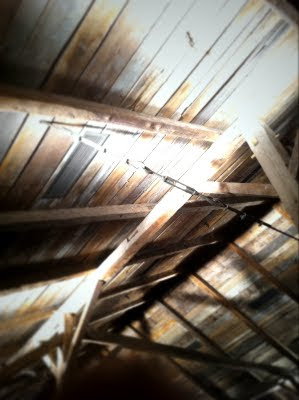 wow, folks...live theater is an interesting animal, for sure.

...and I am saying that with an incredulous note in my voice, even though I've had the privilege to work in this little niche for more years than I have fingers.

SO. We're opening this little (world premiere) opera (that we started working on at about the same time I started my new job) in five days.

We had some mezzo difficulties in the beginning, but we worked it all out.

So we're in this weird space...having to bid adieu to a sweet colleague who left crazy personal turmoil to be a part of our process, joined the project late but threw herself into it 200%...and, in a cruel twist, hurt herself in an effort to make up for lost time. Singers are a generous bunch, to be sure...and this lady really gave us a huge hunk of herself, at a time when she was being pulled in seven different directions.

It's too soon to say goodbye - I hardly had a chance to know her!

But the girl who's been waiting in the wings? Is one of ours, and has proved that she's fast, flexible, and has nerves of steel. I'm so very, very proud of her! (Even though I didn't have a single thing to do with her development...I'm still preening like a mama hen.) It's a big opportunity for her, and I have not a single doubt that she's going to shine.

Tomorrow? One new singer arrives, and we rushrushrush her through a rehearsal/staging process. Our intern defends his thesis. The recording guys (the ones who submitted our last opera to the Grammy committee? Yep, those guys.) start hanging microphones. And we have our first rehearsal with the orchestra in the hall.

It's been a week of miscommunications, overstepped boundaries, bad news, and - shocker - not quite enough sleep. (Related? Hmmm....) But it's also been a week of happy announcements, smiling babies, silly pets, tasty Thai food, birthdays, and homecomings. All of them? More reasons to be grateful...for generous colleagues (who aren't above stress eating or finally saying "REALLY??"), for the inherent flexibility built into this art form (and those who embrace it), for the mandate to move forward, and for the crutches of chocolate, cheese and wine.

And also? I'm grateful for the fact that my windows are open to the breeze, my neighborhood is preening in pinks and whites and greens, and that my Lenten discipline of being meat free is almost over! (And, while this veggie thing is just now starting to work for me and I'll likely continue it for a large part of my eating, I'm looking forward to a bacon cheeseburger like a girl in hoochie shoes looks forward to flats and a foot massage.)