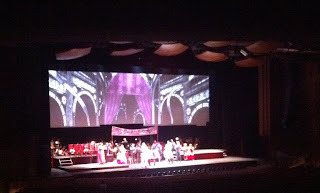 Tonight is our one-night-only production of Sweeney Todd with the National Symphony Orchestra.

It is fan-damn-tastic. The singing and playing are out of this WORLD. The projections are glorious. The costumes are adorable and creepy (if those two things ever go together). A compelling evening of theater that looks great and sounds great.

Yesterday started at 10am, and ended - well, for me, because I went home after the rehearsal - at 11:30pm. When I say 'rehearsal', though, I mean 3 rehearsals occurring simultaneously:


After the triple-threat rehearsal, there was an overnight lighting call...because you can't really see what the projections/lights look like unless you see them when it's dark, like the audience will. And since we're an outdoor amphitheater, well, that stuff has to happen when it's dark outside. Ugh.
And tonight? One stab (slice?) at the show. Weeks of rehearsal, months of planning, for one night.
And that night just happens to be forecast as one of the hottest on record.
So all that work, all this amazing fabulosity, and a whole lotta "it's too hot. I'm not going to be able to make it."
Understandable. Totally understandable...I have used that very same line myself. But it's still totally, amazingly defeating. Because when you have something really special, you want a butt in every seat.
And this is really special.