It's like a train schedule...accurate to the minute. The day after the season ends I'm reduced to a puddle of yoga pants and sloth. After a performance that will go down in my heart as something amazingly special, I hopped over to the cast party for a little bit to nosh and chat. The Studio kids did their rendition of "Firework" in the foyer of the house, pictures were taken, and I got enough hugs from folks to tide me over to the audition tour. Home shortly after midnight, and to bed shortly after that.

The order of the day? Yoga pants, naturally. A Pandora station that cycles through the Sundays, Ivy, Mazzy Star, Radiohead. Ice water and coffee and juice and almond cookies. The NYTimes, Washington Post, and A Partial History of Lost Causes. Endless sudoku. Eavesdropping on the neighbors. Stretching in the front yard between tosses of the tennis ball with the dog. A little bit of worthless, contentless journalling, both here and in my actual book.

If I get some energy? A shower, a quick walk into town for something tasty to throw on the grill. Likely to happen, but no promises.

Reflecting on the summer...the people, the situations, the art. Thinking about the things I'd do better. Not writing anything down in that regard, not making lists of to-dos, to-remember. Just sitting with the information, hoping that the quiet will sift it around a little bit. I'm in better shape than I usually am at season's end, but I'm still pretty darn slow.

Setting the bar low for today. And am almost giddy in the thought that I have another day to myself tomorrow. An embarrassment of riches, it feels like. 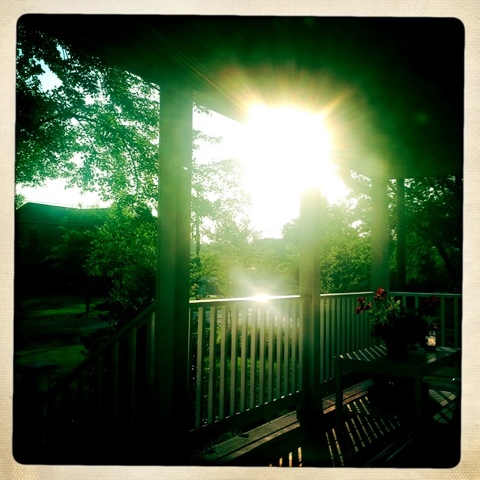 rahree said…
Jess!
sending you all kinds of good vibes for the season...and if you need some start-of-the-season zen, call on me!

(Also, I can totally ship you some of these cicadas...the cat was carrying a particularly loud little dude around for hours yesterday, and kept coming up to my seat on the porch for recognition and praise. I think his brain's a little addled today...) :-)
8:19 PM