I'm home after an operatic (both in music and in scope) week in NYC. I always overextend myself in the city, have never been able to spend much time sitting in a hotel room decompressing. And I'm starting to see it as a really good thing - even though I'm tired-as-all-get-out now that I'm home, I wouldn't have traded a single moment - the reunions with pals from Carnegie Mellon; a production of Carmen that (while not my favorite opera) mightily exceeded the last production I caught; seeing the Broadway revival of The Mystery of Edwin Drood in previews - reliving the fun that I had music directing it way back when, and basking in the company of a pal I've known since high school and another pal who is one of the coolest girls I know; and hosting a good friend for her very first trip to the city. I am happy to have a few days to decompress (and detox, let's be honest...I don't need to actually eat or drink ANYTHING until the next leg of the tour), to reflect, to putter around my house and to write.

Funny how sometimes it's easier to feel like yourself when out of your element? I'm happy to be home, but I'm going to try to keep some of the momentum, the energy from this last week, spinning through even the quiet days.

My five:
1. Autumn. The trees in my yard are the epitome of the phrase "riot of color."
2. Walking around without wearing a backpack.
3. SUPER cuddly pets. The dog missed me. I think the cat did too, but he's alternating between needy and still-angry.
4. Coffee on the porch.
5. Refreshed relationships. Here's to friendships that transcend years. 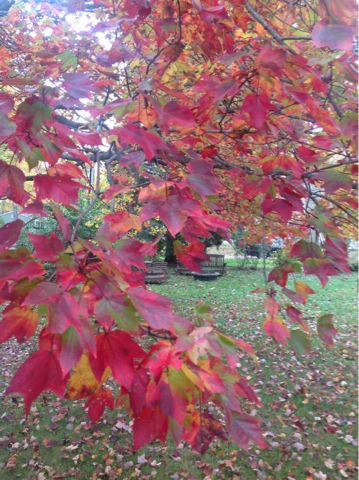