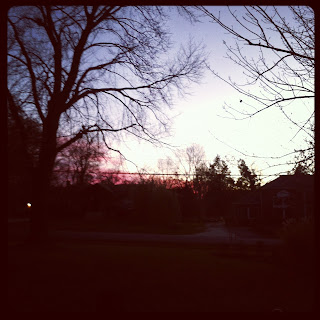 Phew! What a Sunday!

So, someone had the fantastic idea to share some spicy Mexican chicken tacos with the dog last night...Sunday started at 4:45am with a dangerously rumbly-stomached dog and a number of trips outside. Because Yours Truly is totally, 100% lame and had fallen asleep at 9:30pm on a Saturday night? (Don't judge.) It wasn't so much of a big deal. I got my full 3 morning pages done, longhand, in my journal and made a pot of coffee. It was good to be awake early because at 8:15am?

At 8:15am I was running a super-hilly (OK, for me.) 5k. In 34-degree air (which, truth be told, is preferable to warmer weather. I love warming up mid-run!), which I totally overdressed for, if that's possible. But the Smartwool socks and the new playlist kept me chugging right along. (It's yours for the taking - send me an email if you're interested!)

Hubby & the pup met me at the finish line and we walked home together in the sunshine...and hubs ordered breakfast burritos, the arrival of which was perfectly timed with my exit from a ridiculously long shower and my subsequent ensconsing on the couch.

In fact, I spent most of the day on the couch, writing and watching HGTV and The Food Network's Thanksgiving Live. (Oh, Giada...you were awfully handsy with Alton....and he just didn't seem that into you. Maybe next time a smaller hit of that Lemon Whisky drink that Sunny made? Just sayin'...)

I also added 2k to my NaNoWriMo word count, and even though it's a total hot mess as far as characters and plot (I've named the same character at least 3 different names. It's going to be a problem.), at least it's an ongoing hot mess...you can't create and edit at the same time, and I'm honoring that and just creating. There'll be LOTS of editing to come, fo' sho'...but I'm committed to making it to 50k.

Now? Guilty pleasure time: glass of wine and the new(ish) Avengers movie, rewatching the last 30 minutes (the cheap shot the Hulk takes at Thor? One of my favorite parts. Lawdy that never gets old!) over and over again. Getting ready to walk the dog before the Steeler game, which I will likely only make it through a quarter, maybe two. Getting a few more chapters into Zadie Smith's NW before falling asleep.

My five, for a late-autumn Sunday evening: