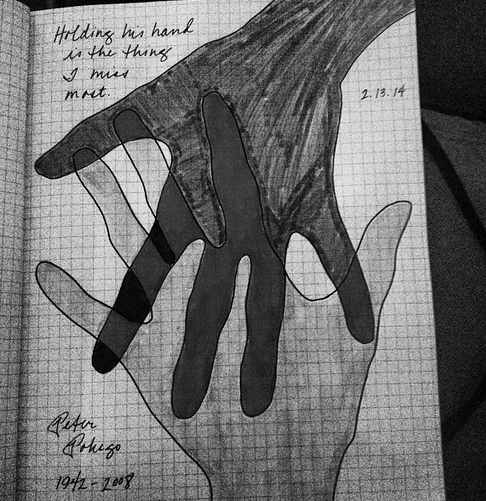 I had been trucking along on my latest cockamamie self-improvement scheme...eating pretty well, exercising, journaling (well, kinda...#lazyjournaling. better than nothing, right?)

And then a foul mood descended on Tuesday and I couldn't get it to leave. Snappy. Anxious. Blue.

I had a glass of wine last night, and then another, trying to feel a little less...well, a little less everything. And then it hit me.

It's been six years to the day since my dad died.

No wonder my mind had been roaming around a sketchy neighborhood!
I'm equal parts relieved that I figured out what it was, and mortified that it took so long to figure it out.

But today he seems pretty close...this wonderful snowfall (and day home from work), a kitchen experiment gone (mostly) right this morning, and finally holding crow pose for two breaths (instead of my usual one...baby steps!) during my yoga practice seem to be signs that he's checking in. Or, at least, that's how I'm choosing to read them.

I'm grateful to him for so much. He had the ability to see both sides of an issue, and to treat both sides with compassion and humor. He was constantly learning- not only did he teach French and coach the football team, he was the yearbook advisor; he gardened; he made stained glass windows and lampshades and a little jewel box for me; he photographed weddings; he taught himself how to cook (after some spectacular failures, admittedly). He was a strong, constant source of love and acceptance.

To my dear friends who have recently lost family, I can only hope that they've met my dad in heaven; because if they have, they're all having one hell of a good time. :)