It's as easy as riding a bike. 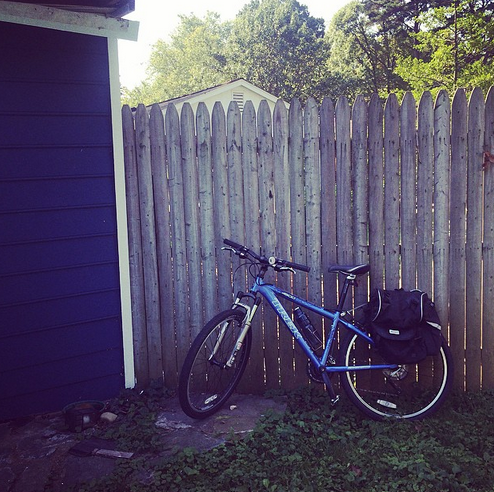 Which, sometimes isn't all that easy.

I used to love riding. Many of my favorite childhood memories are accompanied by my trusty bike: at first, a pink one-speed with hot-rod handlebars and a polka-dotted banana seat, and when I hit middle school a red Huffy ten-speed. Riding around the neighborhood in gangs, to the pool, Covey's (the corner candy store), it was my favorite mode of transportation.

I liked to ride FAST.

But I took a nasty spill...one that landed me in the hospital twice. It was traumatic, and I turned my back on any kind of biking. Just temporarily, I thought...but weeks turned into months turned into years.

In the meantime, I married a bike guy - someone who loves to ride, and really, really wanted me to ride with him. He bought me a bike - a nice one, but not too expensive so I wouldn't feel guilty for ignoring it. (which I did. constantly.) He put cages on the pedals, but then I got stuck in them and fell over on my one attempt, so he took them off. He got it serviced every year, just in case I wanted to ride sometime. Once or twice we took them to the beach so i could noodle around.

It was too much pressure.

I avoided the damn bike.

But then several things happened:


The walking made me realize that I really love to be outside, rather than in a class. I loved seeing other parts of the neighborhood, watching the small changes in the scenery.
But, unless I dedicate hours every day, my walks take me in a fairly small radius; I want to see more.

And, I still dream of going FAST.

So today, when hubs was at work, I took the bike out. Just for a short ride, to see how I'd do.
After five miles, I learned some things:
I didn't realize that I had something to conquer, but it seems like I indeed did.
Looking forward very much to getting back on the bike tomorrow.