I've been trying to write about the last three weeks, and am falling ridiculously, embarrassingly short. I think it's just because so many things have been squished into this short time period.
Politically, we had the inauguration of a man for whom I have strong, negative feelings; and an amazing worldwide coalition of peaceful protests led by women who feel similarly.
Professionally, I presented 2 chamber concerts, and went to NYC for several days to simultaneously attend 2 different conferences. (Pro tip for next year: the shoes you think are comfortable won't be by day 3 of schlepping crosstown.) Made some progress on casting & programming some repertoire for some fun projects, and got closer to firming up some collaborations.
Personally, I spent a week in Western PA with post-op Mom. (She had a knee replaced.) It was challenging and wonderful; wonderful to have the chance to help her out, challenging because she's a fiercely independent and particular woman. Threw a 45th birthday party for my hubby with a bunch of his family & friends, which was a blast!
I'm struggling with anxiety like I never have before. I think it's equal parts a divergence from my normal routine, the constant DC media frenzy, all of the conflicting feelings surrounding my mom's convalescing, coupled with the lack of regular strenuous exercise and the overabundance of bad food and good wine.
So tomorrow starts a 8-week challenge, to get myself back onto a physical/mental fast track. Tracking food, limited alcohol, more protein; exercise 4-6 times a week. Meditation. Art.
But today? I'm spending it napping on the couch, mostly. Football. Pizza. The Young Pope. The Underground Railroad. Catching up on magazines that have accrued over the last two weeks. Walking the dogs, scrolling through FB to see all the pink march photos.
Recharge: almost complete. 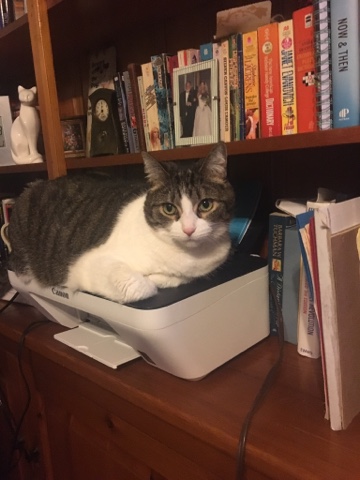